Hit enter to search or ESC to close
Category

the hardest and the easiest thing i’ve ever done…

By admin | Personal | No Comments

Before our little guy arrived last spring, we knew that we had a fairly good idea of what to expect with bringing home a newborn.  We had done it before only two years earlier with our little girl, Ensley.  Our life had already been changed immensely when we became a family of three and all of the thoughts and fears of becoming parents again were accompanied by that little bit of confidence that second-time parents get to have.  Instead, my thoughts were more often consumed with what our little girl was going to think about becoming a big sister.  We were almost laid-back about the whole “newborn thing” when I think about it… not worrying about barely finishing the nursery in time (this time we knew that we’d barely use that room until the baby got older), we didn’t have a closet all full of clothes for his first year, we didn’t have a name all picked out and ready to go, and all of that anxious anticipation that comes along with the first was there… but just overshadowed by the day-to-day life of chasing around our adventurous 2-year old.  Everyone reminded me how awesome it was to be making an addition to our family and not to worry, that the intense love that I felt for our little girl would just grow to include our new baby too.  It felt impossible to imagine our life as a family of four – but even still, as a mom, I felt pretty ready. Over the past year I’ve realized that becoming a mommy of two has been the hardest and the easiest thing I’ve ever done.  Of course I learned that I wasn’t as ready as I thought – you probably saw that thought coming, huh?  I was ready for things like knowing how many diapers we’d need and how little sleep we’d be getting, but I wasn’t ready for what going from one baby to two would do to my heart.

We went from holding on to everything “little” about our 2-year old to suddenly asking her to be a big girl.  Overnight she became a big sister who had to share mommy and daddy’s time, her house, her toys… her world was turned upside down, and it was hard.  So hard on her, and hard on us too.  I’ll never forget how my heart broke during those first few nights home when she would lay on my legs while I was feeding her new brother, sobbing because she wanted me to be holding her instead.  As I did everything I could do to hold her at the same time too, it wasn’t the same and she knew it.  I knew it too, and through my own tears I kept telling myself that this would only last for a little while.  Before long her and her new brother would be best buddies and these tough moments would be distant memories. Well, now they are.  These hard-to-think-about memories are now replaced with the look of pride that Ensley gets on her face when she’s the one who makes her little brother smile or giggle from his toes.  Now I can instead think about our mornings, all three of us snuggled together on the couch while the kids enjoy their morning popsicle (don’t judge me, haha).  I think about Ensley saying “don’t worry bubby, we would never leave youuuu” as she squishes his chubby little cheeks in her hands, mimicking what I would do when Landry is sad about us walking out of the room.  I think about how she now instinctively says “shhh shhhh” to him if he’s fussing while I’m in the shower, or how she quickly sings her own speedy version of “open shut them” if Landry falls and is sad about bumping his head.

I knew the hard part wouldn’t last forever, but boy am I ever glad that our new normal is finally here.  My heart feels mushy just thinking about adjusting to the life with two kids that I love so much now.  Motherhood is tough, but like all moms will tell you – it’s the best job in the world.  It’s the kind of job that makes you feel absolutely helpless at some points in the day, hoping that your kids will never remember just how upset they were about not being able to have a bowl of ice cream before breakfast, and then you can feel like the best mom in the world later in the day when the kids are both happy, full, and rested – laughing together playing in the pretend kitchen.  It’s the hardest and the easiest thing I’ve ever done. I love that we are the age that we’re at and have the amazing opportunity to start our families at the same time as many of our friends.  There’s nothing better than watching your friends experience becoming parents themselves when you already know just how much it will change their lives for the better.  A friend asked me “how is it having TWO kids now?”  After giving my best explanation – being totally honest about the really hard times, but not wanting to leave out the really great times – she said… “so you just do it, right?”  And I’ve thought about that so many times since then.  She was absolutely right.  You just do it.  Life goes on and you have great moments as a parent, not so great moments, you worry, you cry, you smile, you praise, and you just love them as much as you possibly can.  At the end of the day (okay, probably more like end of the week), on that off-chance that both kids are sleeping at the same time and you’re the one awake, you start to think… I’m doing this.  All of this time has passed, far too quickly I might add, and you’ve been doing it all along.  All of the worrying about making sure that both kids are happy and healthy has turned into these unforgettable memories.  It was hard in the moment – very hard at times, but looking back on the months that have passed, it feels easy now.  Ensley’s crying about me feeding her new brother turned into her yelling “feed him, mama!” when she sensed that his fussing might mean that he’s hungry.  Learning to be okay with letting go of some of the things that made Ensley seem so young still has allowed me to embrace the big girl that she’s becoming and share in her pride when she gets dressed all by herself.  Any thoughts about how my heart could possibly ever love another baby just as much as I did Ensley were quickly met with this very familiar, totally overpowering emotion that only a mom can understand.  After it all, my thoughts come back to this… I knew this would happen.  That I’d be coming back to the blog after months (… and months!) of putting it on the back burner, feeling guilty for not writing more.  I just re-read my latests posts and realized that not only have I not posted the majority of the 2012 or 2013 photography season, but my last personal post was when my little girl was only four months old.  Dang.  There are so many things that I’ve missed writing about on here!  I love being able to blog for a couple of main reasons.  One being that I can share lots of pictures and some backstory on the amazing clients that I’ve had the chance to take pictures for over the months.  Also, on the personal side that I have a means of sharing a few of my thoughts and feelings on being a new mom.  Wait… can I even call myself a “new mom” anymore?!?  Believe it or not my thoughts lately have been on how I feel about being a mommy to an almost TWO YEAR OLD!  Ahhh, the words just don’t even seem right as I’m typing them. There are so many feelings that come with those momentous first couple birthdays.  Of course I have lots of people ask and say “can you believe it’s been two years already?”  Absolutely not.  I actually have a hard time thinking about it too much, because I’m sure that I’m on the verge of a nostalgic breakdown, realizing that my baby is hardly a baby anymore.  It’s becoming more obvious every single day.  I can’t tell you how many times I’ve just looked at Ensley in amazement lately when she remembers something that I never thought she would, or when her little feet pitter patter around our house like she’s always known how to run!  She’s witty and funny and I feel like she’s our little sidekick, just happy to be doing whatever it is that we are at the moment.  I can’t imagine our life without her now and can’t believe how she makes the ordinary, everyday things like sweeping the kitchen, folding clothes, or putting away groceries so much more enjoyable.  Just the other day after an epic trip to the grocery store, I started putting away groceries and had to stop and chuckle at the scene in our kitchen.  She’d emptied almost every bag onto the floor and had out three different popsicles, two ice cream cups, and the trail mix – she couldn’t wait to try them all!  You might be thinking, “oh what a mess!,” but I couldn’t help but look at that little girl with ice cream all over her cheeks and think about how boring life would seem without her in it.  I’d take a messy kitchen floor full of groceries to be put away any day to have the times with her like this one where we can sit on the floor and giggle together. I’ve also been thinking a lot lately about how lucky we are that Ensley gets to be a big sister this spring!  We’re looking so forward to welcoming a little boy into our family in early March!  Lately I’ve been daydreaming about how fortunate we are to get to be parents again and how I can’t wait for all of these family memories to include our little guy too! So I guess that what I’m trying to say is… life is good.  It’s been so good and so full of happy days that blogging fell to the wayside.  Not a bad problem to have, I know, but I’d love to get back to sharing!  So, thanks for stopping by – for reading this post – and I’ll look forward to updating you throughout the months with all of the happenings that are going on and memories that we’re busy creating at Don’t Blink Photography!  Happy New Year! 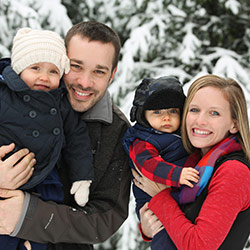